Water TVs: How to Hide a TV on a Boat 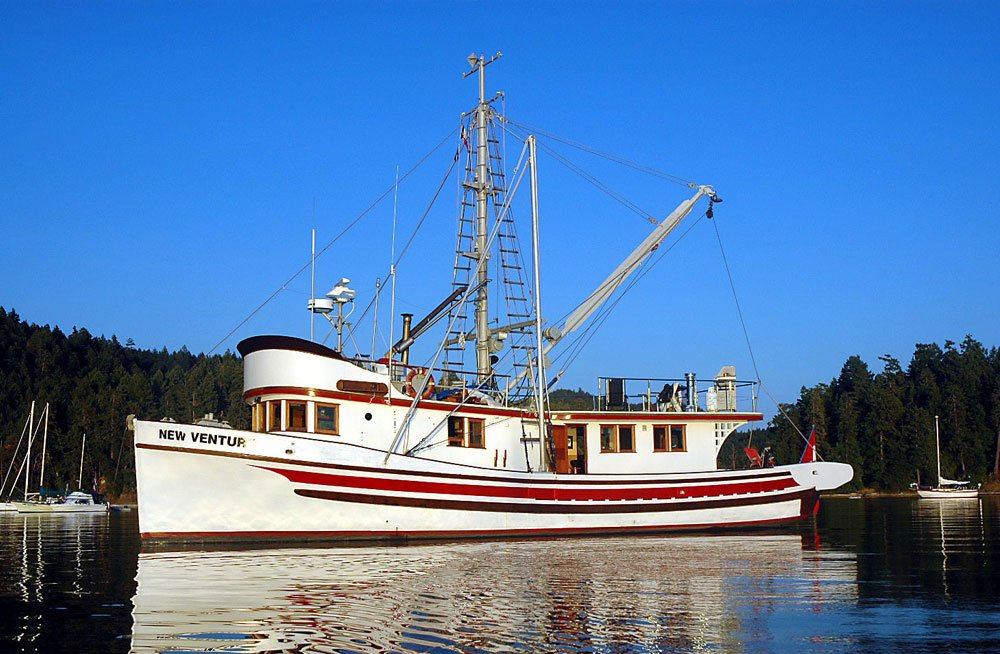 Most of the jobs we get involved in are based on dry land – homes, RV’s and the occasional vintage bus.

However, a while ago we had the pleasure of helping a boat owner in Burnaby, British Columbia, turn the main cabin of their vessel into an entertainment haven.

The boat’s name, the New Venture, used to spend its days cutting through water on the way to fertile fishing grounds. According to a few sources in British Columbia, the New Venture was a proud workman before transitioning into yachtdom.

With a nod to luxury and tradition, the new owner transformed the boat from a rough-necked fishing vessel into a kick-off-your-shoes-and-stay-a-while yacht with all the amenities needed for a tranquil day at sea.

A Day at Sea With a TV You Can’t See: Into the Cabin We Go 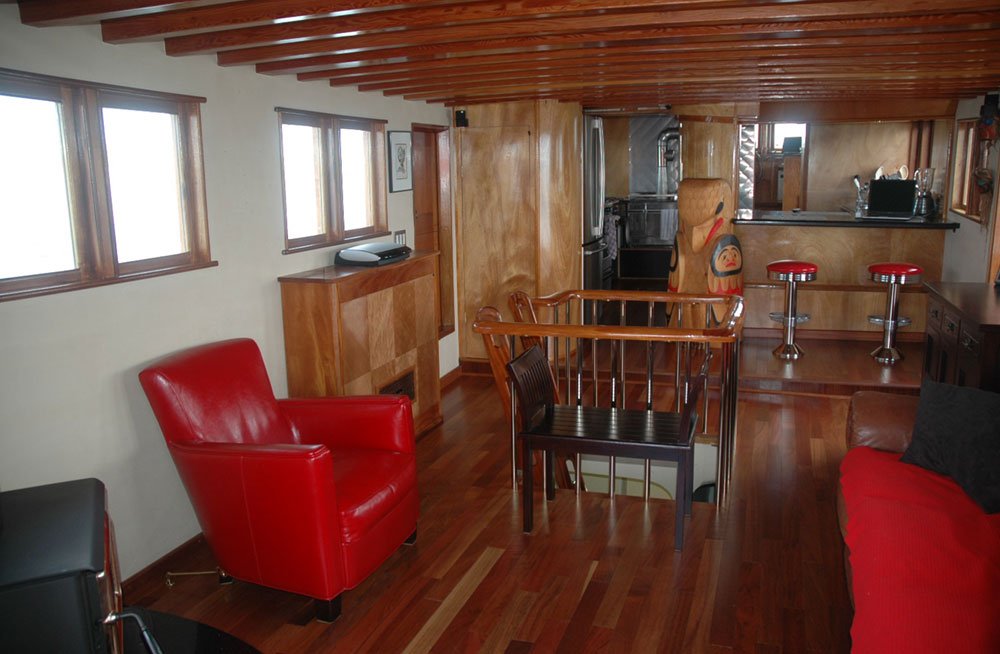 At first glance, the main indoor area of the New Venture looks like a secret hideout tucked away in the top floor of a two-story, seaside bungalow.

Rich wood covers the floor, a chest-high totem pole sits next to the bar and a pair of doors gives way to what we assume is the aft of the ship. 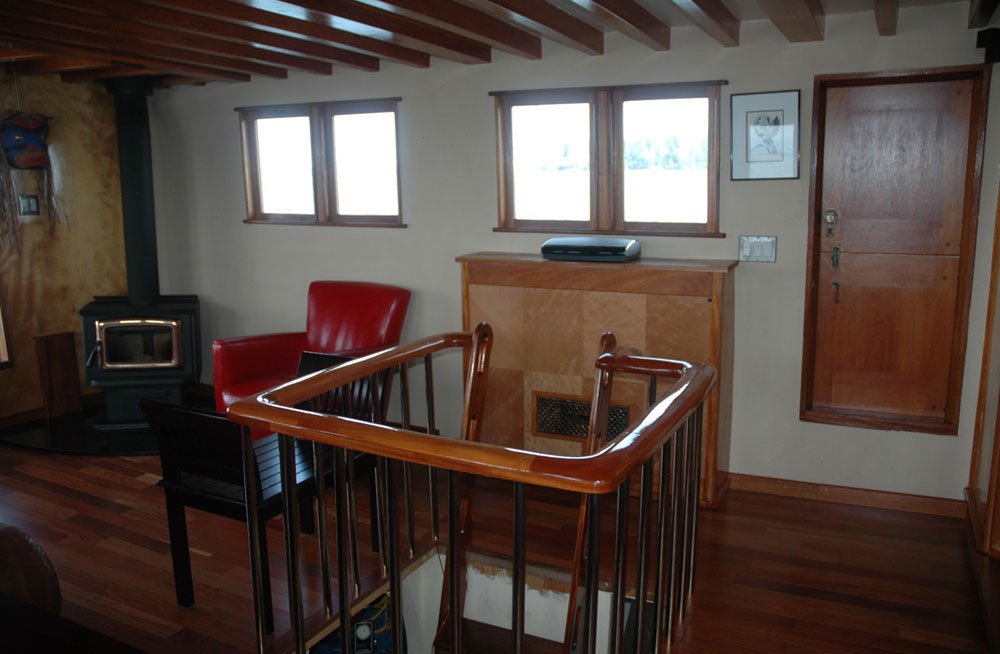 We definitely could see ourselves kicking back in one of the red recliners featured in this space, but what we can’t see (initially) is the flat-screen TV hidden in a non-descript cabinet next to a door leading out to the port side of the New Venture. 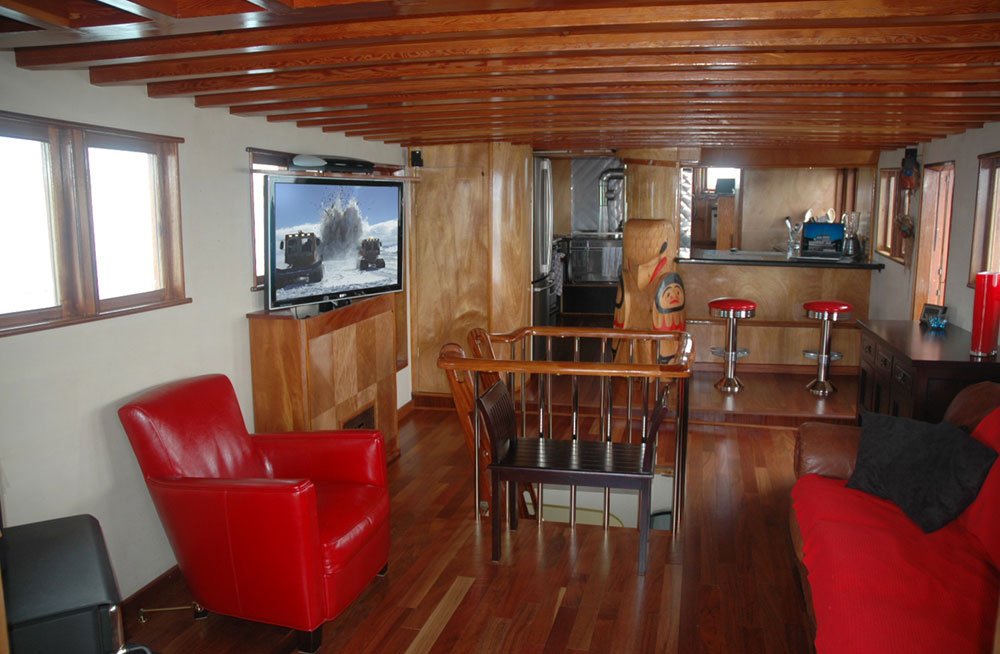 Yet with one push of a button, the TV rises up out of the cabinet and comes to rest just high enough to block out the glare of the sun pouring in from the windows behind it.

For the newcomer to concealed televisions, the hidden TV on the New Venture could very well be the stuff of legends, that elusive whale that drove Captain Ahab mad.

But for our community of homeowners and professionals, the vessel’s TV feature is part of what we do every day of the week.

The client chose our L-45s lift for this project, an excellent choice considering the limited amount of space in the boat as well as the depth restrictions on the cabinet in which the lift is housed. The rails of a staircase are just a few feet away, making passage between the two elements tough enough without having a bulky lift concealment.

But low-profile lifts that don’t require much depth are part of what makes our lifts unique. And that’s where the L-45s excels, because it is less than 6 inches deep…5.6 inches to be exact, and that’s measuring from the back wall of the enclosure to the rear of the TV.

So, when space is a commodity as it is on a boat, that 6 inches goes a long, long way in maximizing home entertainment while having a minimal effect on high-traffic areas. You can see the implications here for other tight situations – RV’s, campers and even a compact man cave require space-efficient features.

A Swivel for All Seasons 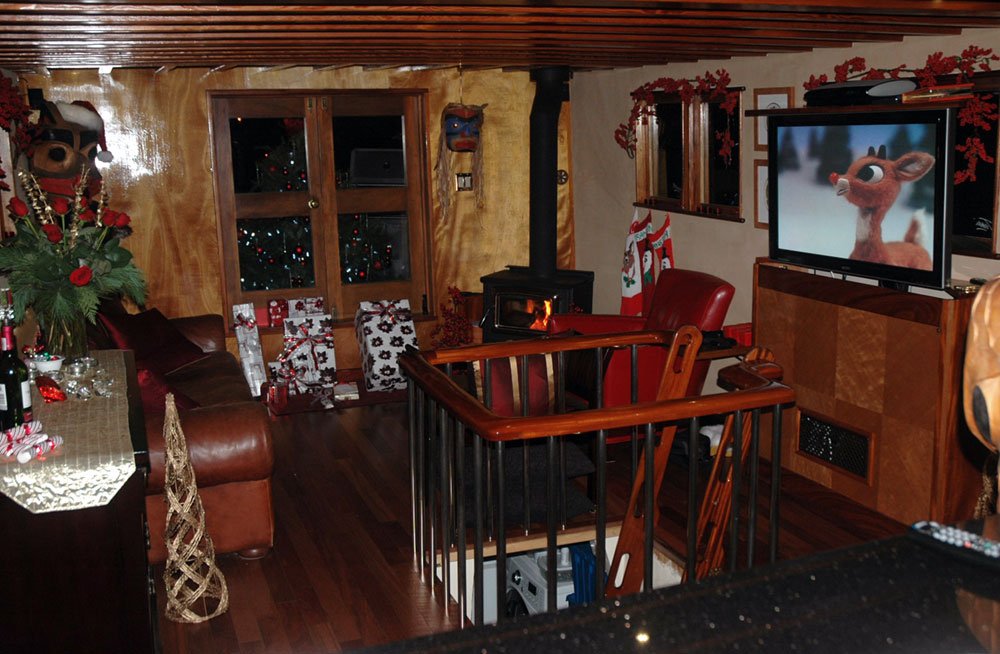 You’ll notice also that the TV is in a position where it can be watched from nearly every corner in the room. This could pose a problem, especially because the room is well lit and can battle some serious glare.

So, our client chose the L-45’s swivel version (L-45s) so that the TV can be adjusted for direct line-of-sight from just about any spot in the room.

So, whether you’re at the bar spinning a salty yarn or just watching the news out of the corner of your eye as you breathe in the early morning breeze tumbling through the aft doors, you’ve got a great view of the screen.

Imagine the possibilities here as you design your own room. If you put a premium on having a space conducive to entertainment (BCS Championship, Super Bowl, Stanley Cup Finals…), our L-45s can help you expand a room and open up different areas that you wouldn’t be able to use if your television was in a fixed position.

Wrapping Up an Epic Voyage

Not to be missed here is the size of the concealed TV on the New Venture. You’ll notice it’s a pretty formidable specimen; that’s a testament to the versatility of the L-45s. The lift can accommodate TV’s with a screen size between 40 and 65 inches.

What are your thoughts on this install? Have you considered fitting a TV into your yacht, or have you completed a similar project? Tell us what you think in the comments below.