The red and gold leaves adorning the trees of Austin, Texas are just beginning to fall. In a stunning home  just north of the city, Jim Casper and his family continue to enjoy their luxurious outdoor space at all hours of the day. With the push of a button three waterfalls cascade off the side of the pool, blue lights give the jacuzzi bubbles a gorgeous purple tint, and a 65” TV screen raises out of the planter just inches away from the water — in view from every part of this outdoor entertainment space.

“I’ve seen a lot of [TVs] lifted out of furniture in houses, but I’ve never seen this. It’s what we do.” explained Jim Casper, Owner of 1st Call Security Solutions. Casper decided to use his own home for his first Nexus 21 installation. He partnered with Ryan Marsh, Owner of Tropical Pools of Austin, Texas, to create a one-of-a-kind backyard that was sure to impress. “It was time for a remodel,” Casper said, “and [Ryan] allowed us the flexibility to be creative.”

“One of the most important things, and most exciting things, for me was putting this TV in,” Marsh said. The duo spent ample time designing the backyard before construction. Everything from a high-end kitchen setup to an extended patio were utilized to create the backyard. “As we were going through the design process we were trying to figure out what to do to make this it’s own kind of project,” Marsh explained. Casper decided to include a TV lift early on, and chose Model L-75s to support a larger TV as well as allow the screen to swivel in any direction. “We were just blown away when everything finally came together,” Casper said.

The reason for the addition of the TV lift was twofold — first, it had to uplevel the aesthetics of the backyard. As a common entertainment space for the Caspers, they wanted a “show stopper” to “wow” their guests at parties. They also wanted use of their backyard without the screen. “You can’t have the TV there all the time, so it pops up and then you’ve got the benefits of the TV,” Casper said, “but it drops away and you’ve got your beautiful backyard.” 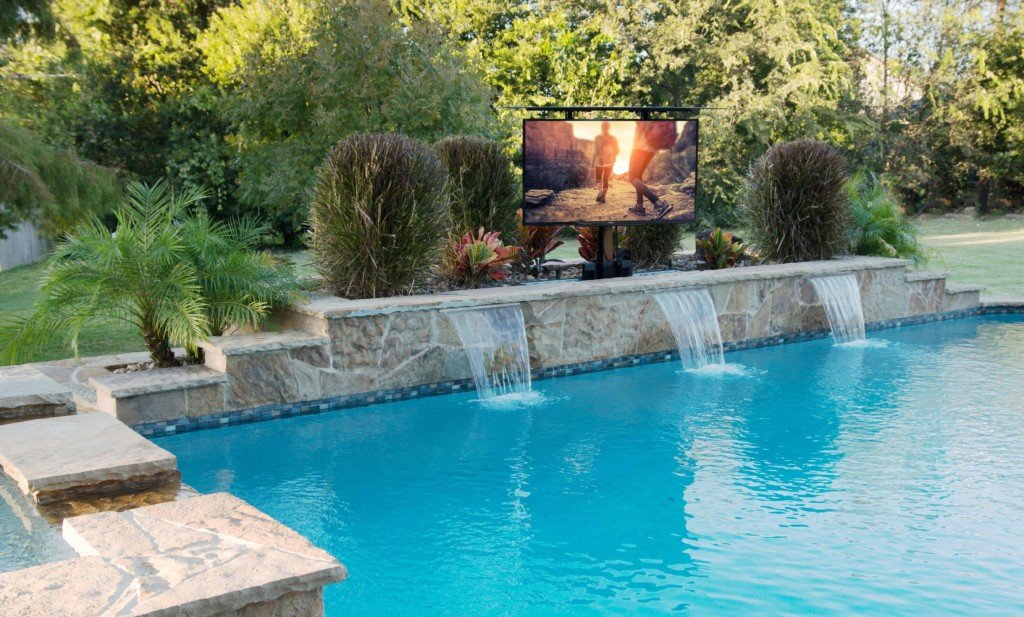 The second reason for installing the lift was to show what was possible as a company. “It’s really important for the customer to get different ideas for things we’re capable of doing,” Casper said. He said this type of install “opens people’s eyes to other things they can do.” “The impact it’s going to have is extremely important to the growth of our businesses,” Marsh said.

One of the most design-intensive parts of the luxurious outdoor space was how to enclose the TV. “There were a lot of things we did to ensure it was sealed properly,” Marsh explained. They incorporated everything from a custom steel frame to support the lift, to pouring four inches of concrete around the enclosure to protect it from the elements. On the outer edge of the enclosure sits a rubber gasket. When the lift is lowered “the concrete top sits down and it sandwiches the gasket” protecting it from the elements. “We’ve had 18 inches of rain this summer, and we’ve had no water in there,” Casper said.

Marsh and Casper looked into a number of lift companies before landing on Nexus 21. “Without Nexus 21 and the lift quality, there’s no way the project would have turned out the way it was,” Marsh explained. Casper said the reliability and continued tech support from Nexus 21 were critical to his decision since the screen was being housed so close to the pool. With Nexus, “you’re only held back by your own creativity.” Casper said.

Sign up for our monthly newsletter to see more stunning installs: