Hidden TV Lift with a Lid 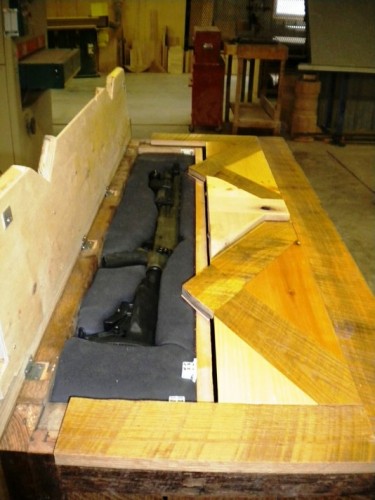 Some of the coolest stuff about custom made TV lift cabinets is the other items people decide to hide in addition to their plasma TV. We’ve seen an end of bed lift cabinet with a secret jewelry compartment. Now, here’s a cabinet made from reclaimed barn wood with a built in storage space just for a firearm. We’re not talking about a little cubbyhole for a 22 caliber handgun, either. This piece of furniture has got a nice padded space for a heavy duty piece of self-defense artillery.

We just hope you don’t get too carried away while you’re watching sports. You could do some real damage to your 50” flat screen with an assault rifle. Of course, this single storage option is no match for the full on stack of hunting gear we featured in another recent blog post. If you’re a guest in someone’s home now and they bring out the remote control, you never know if they’re going to show you their TV or their gun collection. It’s a sign of the times…

What we really wanted to point out about this project by Matthew Hudgins was the lid. Instead of going with a simple hinged lid or a floating lid, this master woodworker did a little of both. The half with the TV floats up when the remote is triggered. The half hiding the weapon hinges up by hand. Both sides can be opened independently or simultaneously for easy access. And it’s not a straightforward split between the two lid halves. They fit together along a zigzag midline that follows the contours of the intricate design on the top. It’s an extra little accent that gives this roughhewn cabinet a nice finishing touch.