Under/Over the Bed Lifts vs Ceiling or Footboard TV Lifts 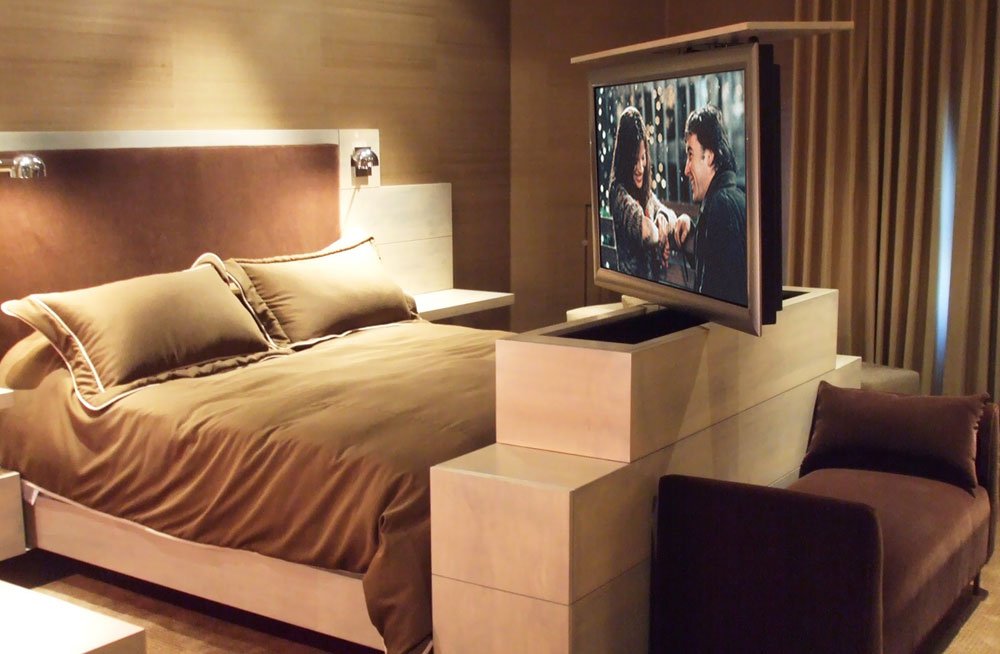 We’ve all seen demonstrations for TV lift mechanisms that fit under the bed. Like a giant robot arm, they slide from under the bed, cranking into position with a whir like something out of a Transformers movie. Alternately, they unfold from the wall, extending with mild creaking to position themselves overhead for easy viewing.
Are these fancy TV lifts really worth it? Let’s look at the science behind them and find out!

• The power needed to slide, crank, revolve, extend and lift is massive. When you pick up a boulder, you get your body under it, and lift straight up from the ground, right? This kind of lift is comparable to taking a long plank, shoving one end under the boulder from afar, and trying to lift it. The stress is incredible, on both you and the board! In contrast, a lift that slides up from its safe hiding place in your footboard or down from the ceiling uses much less power.

• The more complex a mechanism is, the more ways it has to break. Nexus 21 lifts are made to be strong, dependable, and straightforward with their elegant vertical design. This means they can perform perfectly and last much longer than extremely complex lifts with extra moving parts. The result: a safer, longer lasting lift!

• The cost of under / over the bed lifts is staggering – again thanks to the complexity involved. A lift like that costs several times the price of a Nexus 21 ceiling or footboard lift. With our lifts, installation is much faster and less expensive as well. If you have a custom footboard, your TV could be installed and you could be watching the final episodes of True Blood before they get spoiled on the internet!

• Finally, a footboard or ceiling TV lift saves a lot of space! You don’t have to worry about the lift hitting something as it maneuvers into place, and it fits in smaller bedrooms even if you don’t have insane clearance.

Don’t get dazzled by a complicated TV lift that has to crank laboriously into position. Instead, call Nexus 21 and ask about our convenient, easy to install, footboard TV lifts and ceiling TV lifts. You can turn your bedroom into the lap of luxury at a fraction of the cost!