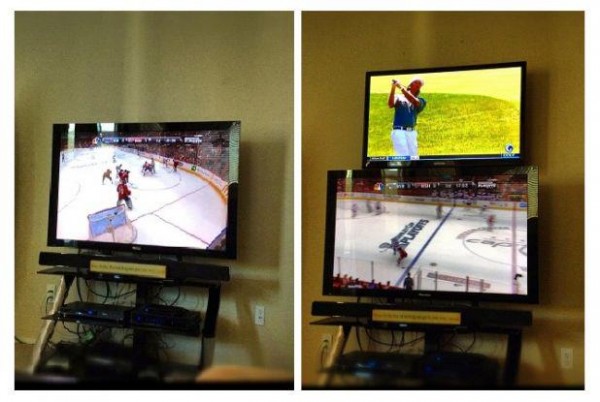 Do you like the idea of watching sports and other programs in split screen mode? But does the action get a little too small when you carve the TV screen up into smaller pieces? One of our customers solved this problem with a project that made us ask, “Now, why didn’t somebody think of this sooner?”

Imagine you’re watching sports with your father-in-law on a nice, big, flat panel TV. You’re totally into hockey and the Detroit Red Wings or the Toronto Maple Leafs are putting on a real gongshow, just the way it should be. But your wife’s dear Dad is a fan of a different sport – one involving a lot less violence and where people actually get in trouble for cursing. You guessed it, he wants to watch a golf tournament. Even though it’s hockey that actually takes place on the ice, golf is the game that moves at a truly glacial speed. Sure, you like to have some fun on the links on a nice sunny weekend, but you don’t understand the thrill of watching that type of sport on TV. Still…you don’t want to end up in the sin bin when the visit is over.

Use Your TV Lift to Stay Out of the Penalty Box
Do you switch the channel to watch the Open Whatever? Do you activate split screen mode and watch a tiny version of the hockey game in one corner of the TV while Jolly Old Jack Nicklaus takes up the rest of the screen? Do you agree to let Dad-in-Law watch the TV while you keep your nose glued to the real game on your tablet or smartphone? A thousand times, NO!

Instead, you earn brownie points with your wife and gain the everlasting respect of your father-in-law. You activate the TV lift to reveal a second flat screen you’ve got stashed behind your main TV. That’s a hat trick you don’t see every day!