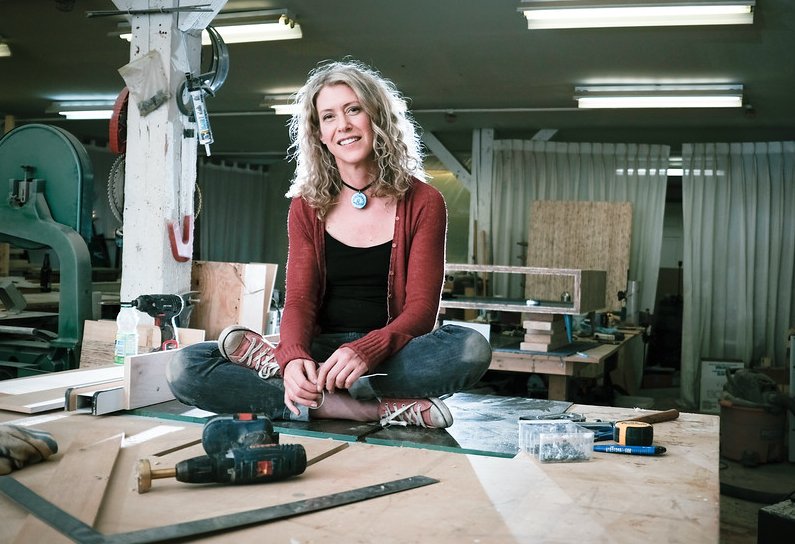 Interior designers enter into a project with very specific objectives.

Designer and maker Christina Hilborne runs a British Columbia design firm. She recently had her first encounter with a Nexus 21 lift system. One of her clients had purchased the lift to fit inside a concealment that doubled as a dividing wall between his kitchen and living room.

Though the inclusion of a lift system into a design element was a first for Christina, her goals remained the same.

“First, my main goal is making something the client loves while also making something I love,” she said when we talked with her. “I’m lucky enough to have clients who agree with my aesthetic.”

She went on to say that her projects need to be highly functional and really well made.

“The craftsmanship has to be excellent,” she added.

Christina realized pretty quickly that functionality and craftsmanship wouldn’t be a problem with the lift.

“I know quality, and you can just feel the weight and the movement of the lift…it’s super high-quality,” she said. “Everything moved like liquid; it was beautiful.”

But the lift was only part of her project. As we mentioned, the lift would be concealed inside of a white divider piece that provides ample separation between the two spaces while incorporating design elements reflected in both rooms.

Here’s a video of the finished product:

As you can see, the concealment she created has a certain level of artistry to it.

Christina’s creativity and keen design intuition is at work on the backside of the TV. She incorporated two blocks of color that tie into very specific elements in the client’s kitchen and living room.

“The turquoise was taken from the upholstery of a chair my client ordered,” she said. “The green is echoing a wall in the kitchen that’s painted the same color.”

She was pleased with the finished product, but, more importantly, so was the client and his wife.

“The reveal was pretty exciting. The client had only seen the concealment half built, and his wife hadn’t been privy to any of the design conversations we had,” she said. “It was really fun unveiling it. They were super excited. They’ve had a lot of friends over since then and everyone’s been blown away and loves it.”

A Pair of Smart Nuances 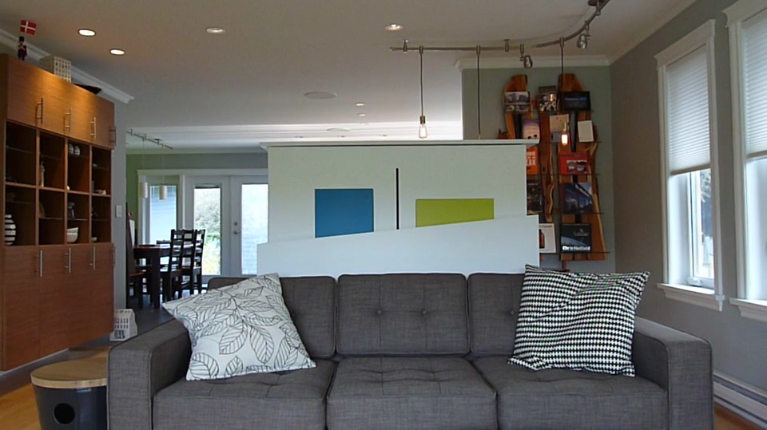 She pointed out a couple of interesting mods we think would work in almost any space. As you can see from the video, the floating lid is actually sitting at an angle when the lift is in its home position. The client was wary of having guests place glasses of wine and other stain-inducing beverages on top of the concealment, so he requested a sloped lid.

Our floating lids are designed to remain extremely steady during ascent and descent, but with such a nice couch so near to the concealment, we certainly understand the client’s apprehensions.

Another unique thing Christina pointed out is that the client installed an outlet underneath the couch so that the lift kit could be plugged in even though its floating out in the middle of the floor. Since it’s tucked away under the couch, guests are none the wiser.

Solid as a Rock 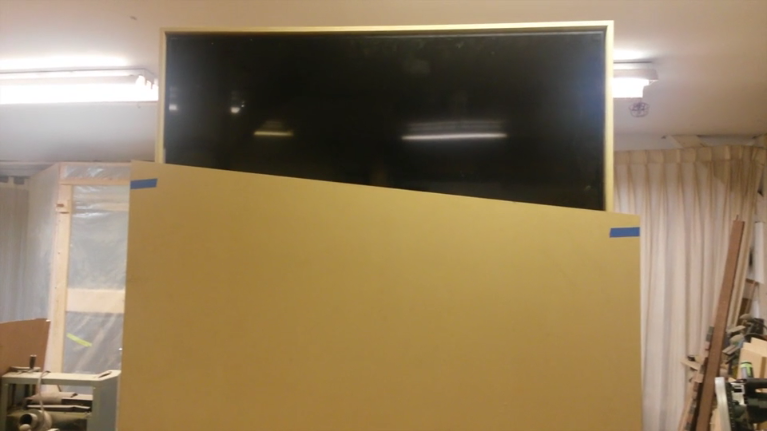 We asked Christina what it was like testing the lift in her workshop. Because she had to go through multiple tests, she was relieved the lift was “dead silent,” as she put it.

“I’m glad my client picked a really high quality lift,” she said, “because it would’ve sucked working with something loud, vibrating or wobbly. It’s solid as a rock.”

Another contributing factor to the success of this project is that Christina was able to talk with our customer service team as she was drawing up designs for the concealment. She wanted to make sure her measurements wouldn’t cause any problems for the lift. There weren’t any glitches; she was ready to roll with what turned out to be a stunning work of art.

Like Christina, all of our clients can call us at our Scottsdale office and talk directly with our account executives.

Do You Have a Similar Story?

Designers all across the world consult with us to come up with plans that honor their creativity and the desires of their clients. Because our systems are so simple and our installation directions are clear, integrating a Nexus 21 lift system into a room design is a painless process.

Do you have an artistic install you’re proud of? Is there something about this project that inspired you? Let us know in the comments section below.