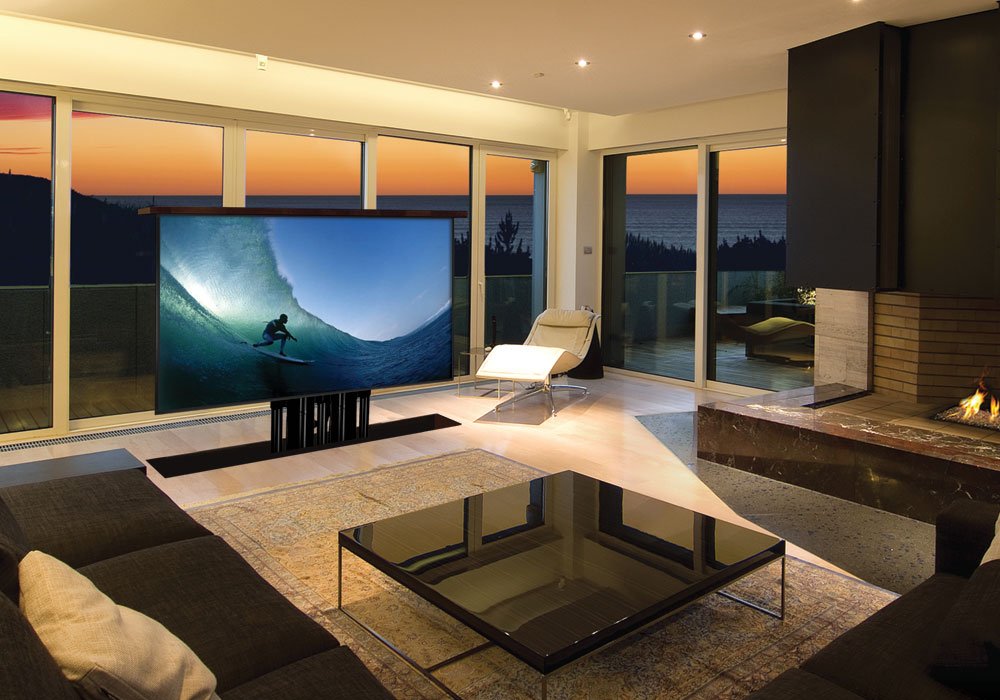 There’s another kind of horizontally activated TV lift on the market that slides out of the wall edgewise (it sticks out like a signpost). This type of lift can be mounted at any height and the mechanism wouldn’t have to be too complex to work. So, this kind of lift might be useful for a commercial setting where you want a TV screen located in a high traffic area to display marketing media. If you mounted a TV on either side of the lift bracket, passersby in both directions could be targeted with advertising. Of course, the lift would have to be super heavy-duty to hold that much weight at the end of the lift arm.

However, this design has a few shortcomings for use in a home entertainment setting. First, it is meant to be viewed from a position near the wall since the flat screen is held at right angles to the wall. This would seriously limit your seating options. Generally, you want the screen to be parallel to the wall so it can be viewed from a wider range of seating locations. Or, you want a TV lift that swivels (which a slide-out lift can’t do).

Second, there’s always the possibility of running into the lift if it’s mounted around head height. Cracking your noggin on the corner of a TV is no one’s idea of entertainment (unless you’re really into the 3 Stooges). However, if you put the lift high enough to avoid accidents, you will have to crane your neck during seated viewing. With any wall mounted lift, improper placement is a common problem that reduces user enjoyment.

Finally, a horizontal in-wall lift requires a pretty deep wall space. A 50” TV is 43.6” wide. That thickness of wall space is unlikely to be present in the average home. That’s why so many homeowners choose drop down in-ceiling and in-floor popup TV lifts instead. You’re a lot more likely to have attic or basement space to accommodate your big screen comfortably.