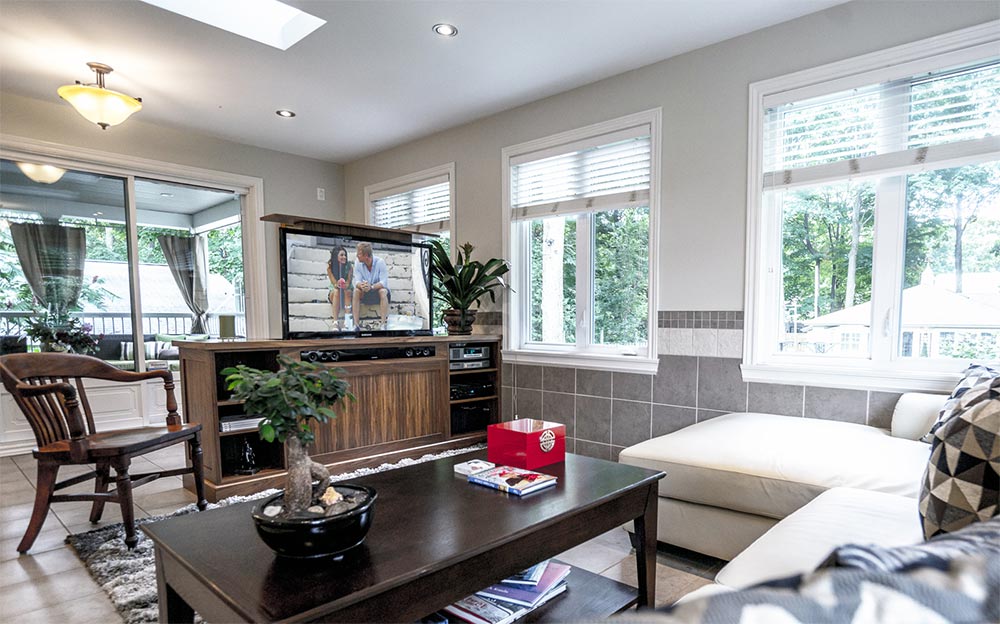 In the final post of this series, we’ll be looking at one of the more complex horizontal TV automation systems. This kind moves on a track along a chain. The chain is flexible so it can be straight or curved. Some of the fancier installations actually move the TV around in a full circle. The TV screen itself can be swiveled so that it lies flat against the wall. This type of lift system was originally only available in a manual version but is now offered in a motorized model as well (for an admittedly steep upcharge).

Like the slide out lift we looked at earlier in the series, this concept might have a place in commercial applications. Some of the architectural concepts involving multiple screens that are all rotated in different directions are interesting. But it’s kind of overkill for a home entertainment center. Besides, this kind of horizontal lift doesn’t really do what you need it to most – actually hide the TV out of sight. Having the TV slide over and hang against the wall isn’t really an improvement over a traditional wall mount. It’s still right there staring you in the face.

Technically, you could put a track-based system in a closet so the TV moves out into the bedroom when you want to view it. But that would involve making substantial changes to the door, frame and ceiling (not to mention eating up closet space). The track itself would still be visible on the ceiling – unlike our drop down lifts which are perfectly camouflaged. The only real way to conceal the track itself is to create some kind of drop ceiling. This means adding a track system after initial home construction can significantly increase installation costs. In contrast, a popup Nexus 21 system can be used with equal ease for a built-in project or added later in a TV lift cabinet.