Nexus 21 v. Lifts Made in China: Is There a Difference?

Let’s set the stage for this showdown.

In one corner, there’s a slew of our competitors. They source their motors, brackets and other hardware from various Chinese manufacturers. Their products carry a price tag that’s more like a feathery jab than a haymaker. Same goes for the quality of their parts – more of a pinch than a powerful uppercut.

In the other corner, you’ve got Nexus 21. Our price tag packs a heavier punch, though we aren’t the most expensive lifts on the market. The quality of our parts basically knocks out any chance of part failures. We’re solid, strong and well trained.

Can you see where this fight is going? We can say this much: it doesn’t end well for the mass-produced TV lift market. To get the inside information on why Nexus 21’s lifts are the main event in the lift world and not the undercard, we spoke with account managers Aaron Townsley and Mark Nickles about safety, quality and the production facilities.

How much safer can Nexus 21 lifts really be?

Software is always running when your lift is in operation, kind of like how trainers are always talking to their fighters during the bout.

One of the defining features of our lift software is something known as the collision detection system.

“When the TV is traveling down – let’s say it’s installed in a cabinet – and a hand gets underneath the lid,” Aaron pointed out, “as soon as the lid makes contact with the obstruction, the collision detection system stops the lift and backs it up a few inches.”

In fact, Mark and a few colleagues once put a packing balloon under the lift to test the detection system. When the lid hit the balloon, the detection kicked in and the lift moved away from the collision. Balloon intact.

“None of the knockoff systems have safety measures like that,” Mark said. “There’s no software programming or safety measures to stop the system if your child’s arm is in the way.”

Is there really a big difference in quality?

Let’s start this round with foreign-made, mass-produced lifts. We asked Mark if the levels of quality differed so much that there was a noticeable gap. His response? Nexus 21 lifts are professional grade. The competition?

“They’re a retail grade product,” said. “When you can knock out your lifts cookie-cutter style, you have no idea what the quality will be. These manufacturers pander to a market that is cost-driven and nothing else like safety measures, operation and ease of use is being considered.”

Nexus 21 lifts, on the other hand, are made with professional-grade components. For example, all but one of our lifts is made from steel parts. And our flip down lift, the CL-65, is crafted from aluminum, but not just any aluminum: we chose aircraft-grade to ensure our standards of quality.

Aaron said testing for the CL-65 flip down lift was pretty rigorous.

“We tested it with three to four times the weight it’s rated for. We ran it to death,” Aaron said. “We wondered, ‘When is it going to fail?’ We couldn’t get it to fail. We couldn’t get a dangerous scenario out of it.”

And, he said, every single piece of equipment packaged into a lift is tested and verified before it leaves the factory.

What about the actual factory where the lifts are made? 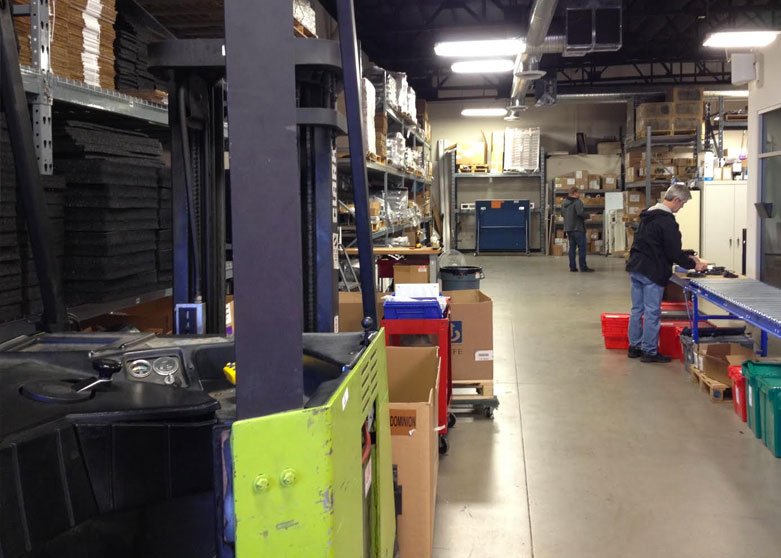 Many people who visit our website discover that we’re based in Scottsdale, Ariz. But in this day and age of imported goods, where a company is based doesn’t always indicate where its products are made.

If a production location is 6,000 miles away from the company headquarters, it’s pretty tough to get quick inspections to ensure quality and safety.

How long does it take for Mark and Aaron to get to the factory? About as long as it takes to walk from their desks, down a 50 foot hallway and through the door of the Nexus 21 production facility. That’s right; all our lifts are made in our Scottsdale headquarters.

Some metal components are contracted out to local fabrication firms, but all the work, Mark said, is done in the United States.

“We aren’t ordering cheap motors from overseas that are mass produced,” he said. “We inspect every motor when it’s built. Everything goes through quality inspection.”

In fact, members of the Nexus 21 sales team occasionally meet with the production team to go over new ideas and analyze how they can improve the production process. It’s a quality-driven, tightly knit company.

“It’s astonishing that it doesn’t take 200 people to do what we do, but the way things are set up we can get it done with a small staff,” Aaron said.

What are your thoughts on this discussion?

We think the scorecard is pretty clear… it’s a 3-0 unanimous decision, with safety, quality and production facility all in favor of Nexus 21. But we want to leave the floor open for you to give our opinion about lift safety, lift quality and where the lifts are made.

What’s your experience been like with your Nexus 21 lift in these areas? Have you previously purchased a mass-produced, foreign lift? Let us know in the comments section below.

In the meantime, we’ve created a chart that shows more of the differences between our lifts and those made in China. Go to our Order Now page and click on the “Compare Our Products to Lifts Made in China” link in the bottom left-hand corner of the page.